Travelers come here for jaw-dropping scenery but are charmed by the many cultural attractions. Steeped in history, cities such as Zurich, Geneva, and Lausanne offer excellent museums and galleries, historic buildings, and renowned music festivals. The capital is Bern with a stunning medieval old town hugging the crook of a river. Germany, Italy, Austria, and France border Switzerland, and their languages and customs infuse this country with a multicultural sophistication.

From the Italian architecture of palm-studded Ticino to the dialects of Swiss-German and Latin-derived Romansch, Switzerland can sometimes feel like several countries in one—yet all with the slick packaging and punctuality for which it is famous.

Plan your trip and explore the best sites with our list of the top tourist attractions in Switzerland.

The Matterhorn, Switzerland’s iconic pointed peak is one of the highest mountains in the Alps. On the border with Italy, this legendary peak rises to 4,478 meters, and its four steep faces lie in the direction of the compass points. The first summiting in 1865 ended tragically when four climbers fell to their death during the descent. Today, thousands of experienced climbers come here each summer.

At the foot of this mighty peak, lies the charming village of Zermatt, a top international resort with horse-drawn carriage rides, quaint chalets, and world-class restaurants and hotels. To preserve the air quality and peaceful ambiance, motorized vehicles are banned in the village.

In the winter, skiers can schuss down more than 300 kilometers of slopes. In the summer, swimming and tennis are popular pursuits as well as hiking, biking, and climbing in the surrounding mountains. Summer glacier skiing is also available.

2. Jungfraujoch: The Top of Europe

One of the most popular things to do in the beautiful Bernese Oberland is the train journey to Jungfraujoch, the “Top of Europe,” with an observation terrace and scientific observatory perched at 3,454 meters. The longest glacier in Europe, the Great Aletsch Glacier begins at Jungfraujoch, and is a UNESCO World Heritage Site. The famous Eiger Trail from the Eiger glacier station to Alpiglen clings to the rocks at the foot of the north face.

Other popular walks include Panorama Way to the sunny, south-facing First slope; the Gletscherschlucht (Glacier Gorge); and Öpfelchüechliwäg, the high-altitude trail from Holenstein to Brandegg through fields of flowers, alpine pastures, and woodlands. The less active can ride gondolas and cable cars to scenic viewpoints over the Lauterbrunnen Valley.

Picturesque Grindelwald is a glacier village in the Jungfrau region, which makes a great base for adventures into the surrounding mountains. It nestles at the base of snow-cloaked mountains and is one of Switzerland’s oldest and most popular resorts. Towering above this alpine valley is the tiara-shaped Wetterhorn and the sheer north face of the Eiger, one of the planet’s most dramatic and difficult climbs. Between the mountains lie Grindelwald’s two glinting glaciers. For the best views, Faulhorn, at 2,681 meters, offers breathtaking panoramas of the giant peaks.

Nestled between Lake Thun to the west and Lake Brienz to the east, Interlaken is one of Switzerland’s most popular summer holiday resorts. In the center of town, Höhematte is a marvel of urban planning with 35 acres of open space. Flower gardens, hotels, and cafés surround the Höheweg, the main boulevard through here with breathtaking vistas of the mountains. The mighty peaks of the Eiger, Mönch, and Jungfrau tower above the town providing excellent opportunities for alpine adventures. Hiking, climbing, abseiling, and kayaking are prime pursuits.

More than 45 mountain railways, cable cars, chairlifts, and ski lifts transport visitors into the surrounding countryside and offer plenty of chances for sightseeing from up above. In the winter, skiers and snowboarders can take their pick from the surrounding resorts and cross-country ski along the extensive trail network. In the summer, paragliders launch from Beatenberg-Niederhorn. To admire the scenery from lower elevations, hop aboard a paddle steamer for a cruise around the lakes.

Imagine a sparkling blue lake surrounded by mountains, a car-free medieval old town, covered bridges, waterfront promenades, frescoed historic buildings, and sun-splashed plazas with bubbling fountains. No wonder Lucerne (in German, Luzern) is a top spot for tourists. Famed for its music concerts, this quintessential Swiss town lures renowned soloists, conductors, and orchestras to its annual International Music Festival. The Culture and Convention Center is home to one of the world’s leading concert halls.

One of the city’s most famous landmarks is the Chapel Bridge, built in the 14th century. In a small park, lies the famous Lion Monument, a poignant sculpture of a dying lion, which honors the heroic death of Swiss Guards during the attack on the Tuileries in the French Revolution. History buffs will enjoy the Swiss Transport Museum with extensive exhibits on all forms of transport, including air and space travel, railroad locomotives, and a Planetarium.

For beautiful views of Lucerne, the Alps, and the lake, ride the funicular to the Dietschiberg on the north side of Lake Lucerne; cruise up Mt. Pilatus on the cableway; or head to the Rigi, a famous lookout point.

Lake Geneva, Europe’s largest Alpine lake, straddles the Swiss/French border, and laps at the shores of some of Switzerland’s most popular cities. The city of Geneva (in French Genève; in German Genf) sits between pretty snow-capped peaks at the point where the Rhône spills into Lake Geneva.

This French-speaking “capital of peace” is the European seat of the United Nations and exudes a pleasing blend of French joie de vivre and Swiss structure. Promenades, parks, and gardens surround the lake, and the old town is a lovely spot to stroll among the historic buildings. The Jet d’Eau, a fountain in Lake Geneva shooting water 150 meters into the air, is a famous landmark. Cultural attractions include the Opera House and the Grand Théâtre, which stages international acts.

Also on the lake, about 62 kilometers from Geneva, Lausanne boasts lovely views over the surrounding region and the lake, with the Alps rising in the distance. Take a stroll through the medieval old town with its cute cafés and boutiques and stunning Gothic cathedral. At the foot of the Alps, on Lake Geneva, Montreux hosts the world-famous Montreux Jazz Festival in June/July.

On the shores of Lake Geneva, near Montreux, the Chateau de Chillon (Chillon Castle) has inspired artists and writers for centuries. Lord Byron, Jean Jacques Rousseau, and Victor Hugo are among the luminaries who have written about this architectural treasure.

Once the stronghold of the Counts and Dukes of Savoy from the 12th century, the complex encompasses about 25 buildings clustered around three courtyards. Highlights include the Great Halls, with magnificent views of Lake Geneva; the Gothic underground rooms; the Chapel, adorned with 14th-century paintings; and the Camera Domini, a bedroom occupied by the Duke of Savoy decorated with medieval murals.

Mirror-like lakes, glaciers, jagged peaks, alpine forests, and oodles of sunshine make St. Moritz one of the world’s top mountain destinations and a must-have on your list of things to do in Switzerland. Palatial hotels and pricey restaurants are par for the course at this chic resort town, which has hosted two winter Olympics.

Sitting in an alpine valley 1,800 meters above sea level, the town is divided into two parts: St. Moritz Dorf sits on a sunny terrace overlooking the Lake of St. Moritz. The other part of town, lakeside St. Moritz Bad on the valley floor, is a health resort with less expensive lodging. Winter sports run the gamut, from skiing, snowboarding, skating, and bobsledding to tobogganing on the famous 1.2-kilometer-long Cresta Run.

In the summer, hiking, biking, and water sports abound. Glacier skiing is also available in the summer. Adding to all this spectacular mountain scenery, St. Moritz is a cultural crossroads. Romansch, German, Italian, French, and English are all spoken in the surrounding areas—not to mention the different languages of the many well-heeled international visitors and expats.

In a stunning location, perched on a peninsula of the River Aare, the Swiss capital of Bern exudes old world charm, and the city’s medieval old town is a UNESCO World Heritage Site. Strolling along the cobbled streets, visitors can explore the tallest cathedral in Switzerland, with panoramic views from its tower; 16th-century fountains; the Zytglogge medieval clock tower with moving puppets; and six kilometers of shopping arcades, called “Lauben” by the locals. The Rose Garden (Rosengarten) offers beautiful views of the old town center.

Bern has many tourist attractions waiting to be discovered, including many excellent museums. Art lovers will appreciate the impressive galleries, including the Zentrum Paul Klee, the world’s largest collection of works by this famous artist, and the Bern Museum of Art (Kunstmuseum). Don’t miss the markets, held in the Bundesplatz (parliament square) with views of the elegant Renaissance-style parliament building (Bundeshaus). Families will also enjoy a visit to the Bear Park.

Lake Lugano lies on the Swiss/Italian border in Ticino, Switzerland’s only official Italian-speaking canton, and offers a tantalizing taste of the Mediterranean. Citrus, figs, palms, and pomegranates flourish in the mild climate here—even as snow-capped peaks beckon in the distance. In the towns around Lake Lugano and Lake Maggiore to the west, the feel of Italy is unmistakable in the architecture, the piazzas, and the passion for fine food, which spills over the Italian borders from the south, east, and west.

Visitors can explore the area by touring the lake on one of the white steamers or renting a boat. For a panoramic overview, Monte San Salvatore offers one of the most spectacular vistas of the surrounding countryside, lake, and snow-capped peaks.

Lugano, a financial center and the largest and most significant town in Ticino, is a popular summer resort. Northwest of Lugano, in sun-drenched Locarno on Lake Maggiore, Swiss lakeside living takes on a subtropical touch with warm days, blossoming gardens, and palm-studded estates. In Bellinzona, capital of the canton, three magnificent castles are UNESCO World Heritage sites. 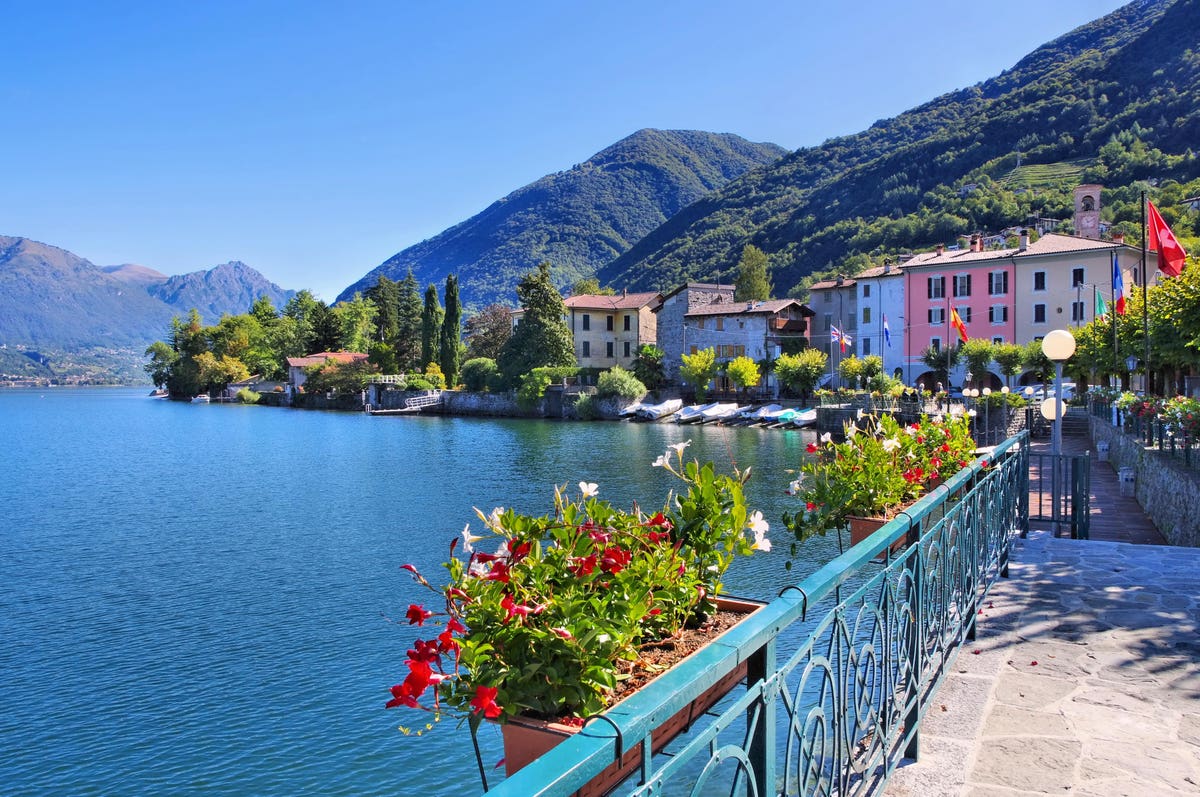 Zurich is Switzerland’s largest city, a major transportation hub, and a top starting point for travelers. The city lies at the northwestern end of Lake Zurich astride the river Limmat. Beyond its buttoned-up façade, this affluent banking capital boasts a rich line-up of cultural treasures.

A great place to begin a walking tour is the cobbled streets of the Old Town with its quaint shops, cafés, and galleries. Mile-long Bahnhofstrasse, one of Europe’s finest shopping strands, beckons with designer stores selling fashion, watches, and jewelry.

Venturing away from the boutiques, visitors will find more than 50 museums and 100 art galleries, as well as many other tourist attractions. A top pick is the Kunsthaus Zürich, the museum of fine arts, with an impressive collection of art from the Middle Ages to the present day. Another favorite is the Rietberg Museum, focusing on non-European art with many works from China, India, and Africa.

A short stroll from Zürich’s main station, the Swiss National Museum, in a Gothic chateau, spotlights Swiss cultural history. Families will love the Zurich Zoo with an elephant park, penguin parade, and Madagascar pavilion. From the city, take a train ride to Uetliberg Mountain for panoramic views of the city and countryside.

View all posts by msseawolvescom →